Polystyrene, also known as Plastic number 6, and commonly referred to as Styrofoam (in the same way some people refer to all tissues as Kleenex).  Technically, Styrofoam is a Dow Chemical-trademarked name for Extruded Polystyrene used for building insulation and floral foam.  So, the rest of the polystyrene family (CD cases, coffee cups, packing materials, meat trays, egg cartons) are really just polystyrene or #6 plastic. 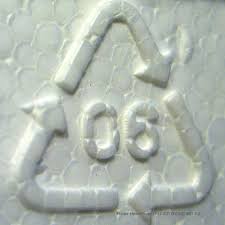 As I had previously written about Styrofoam in NYC Styrofoam Ban the major issue with polystyrene is it is made to outlive us by hundreds of years and is not easily recycled (it is usually not accepted in residential recycling programs).  Luckily, there are some ways to recycle it if you cannot reuse it and it may just require a quick, local errand to do it.  According to Recycling NJ, packing peanuts and unpopped bubble wrap can be taken to some shipping stores such as The UPS Store or PostNet and the expanded polystyrene (the hard stuff found in electronics boxes protecting TVs, laptops, etc.) can be taken to places like Foam Pack (which I just happen to live near enough to for this to be a very easy trip).  I already made my first trip there a couple of weeks ago — just drive up and put the polystyrene into the specially-marked dumpster and you’re done!

I’m still waiting on Dunkin Donuts to ditch the polystyrene cups altogether, but for now I’ll keep reusing my travel mug (better for the environment than using a single-use paper cup, as well).  Also, as much as I love Eggland’s Best eggs, the styrofoam carton is usually a dealbreaker for me at the store.  And, I need to get better with shopping at the local butcher and farmer’s market, so the meat I take home is in deli paper, the fruit and veg are in reusable produce bags and none are packaged on a polystyrene tray.  These are the simpler choices we can make and they are completely doable for most of us.