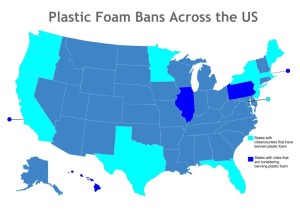 The New York City Department of Sanitation announced a ban of some polystyrene containers beginning July 1st, 2015, joining other metro areas such as Los Angeles, CA, Portland, Washington DC, and Seattle. According to the Department’s website, nyc.gov, polystyrene (better known by the Dow Chemical brand name, Styrofoam) items are banned for sale, distribution, and use.  This includes take-out containers, single-use cups, and packing peanuts.

I loathe Styrofoam for these types of use. I know, in theory, it can be recycled into other foam products, but how often do you see a place you can recycle your Styrofoam containers? I am not sure I have ever seen one.  And, even if you can find a place to recycle them, it doesn’t change the fact that it is a plastic made from non-renewable fossil fuels.  There are better, biodegradable or easier-to-recycle alternatives that perform the function just as well, such as Greenware, BIO-PLUS EARTH, or aluminum trays. 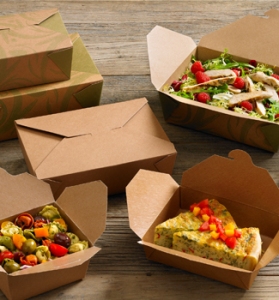 Although I understand the benefits of polystyrene (bicycle helmets and building insulation, for example), the fact of the matter is that the foam polystyrene contributes to a huge litter problem.  While I admit that builders and manufacturers using the polystyrene for other more longer-life products may be able to reuse or recycle the materials when their initial use has passed, the very lightweight foam used for cups and plates is easily carried in the wind and often is disposed of in the trash, which ultimately winds up in the landfill.  For hundreds of years.  Polystyrene is just not quick to break down.

Besides the environmental benefits of a ban like this, human health will be affected as well.  In Earth Resource Foundation’s Polystyrene Foam Report, “styrene is classified as a possible human carcinogen by the EPA and by the International Agency for Research on Cancer (IARC).”   And, we are eating food and drinking beverages from containers made of this material?

Another added benefit of the NYC ban is that Dunkin Donuts has unveiled their #5 polypropylene (PP) cups in the NYC market, with an additional double-walled paper cup being tested in other markets, for a goal of phasing out U.S. foam cups by the end of 2015.  (Thrillist, Yahoo Food).  Quite exciting to someone who goes out of their way to bring their own reusable cup for a cup or coffee at DD, or on occasion has had to go with a small (served in a paper cup), just to avoid the foam cups.

I expect some outrage from this NYC ban, and subsequent bans afterward, but the difficulty and cost of recycling polystyrene, along with the negative health effects, and the problematic litter make this ban on foam polystyrene positive for everyone.  To those fighting it because they have to raise their prices to cover the cost of the new containers:  I would gladly pay more for my cup of coffee to drink it out of a more responsible biodegradable or recyclable cup.